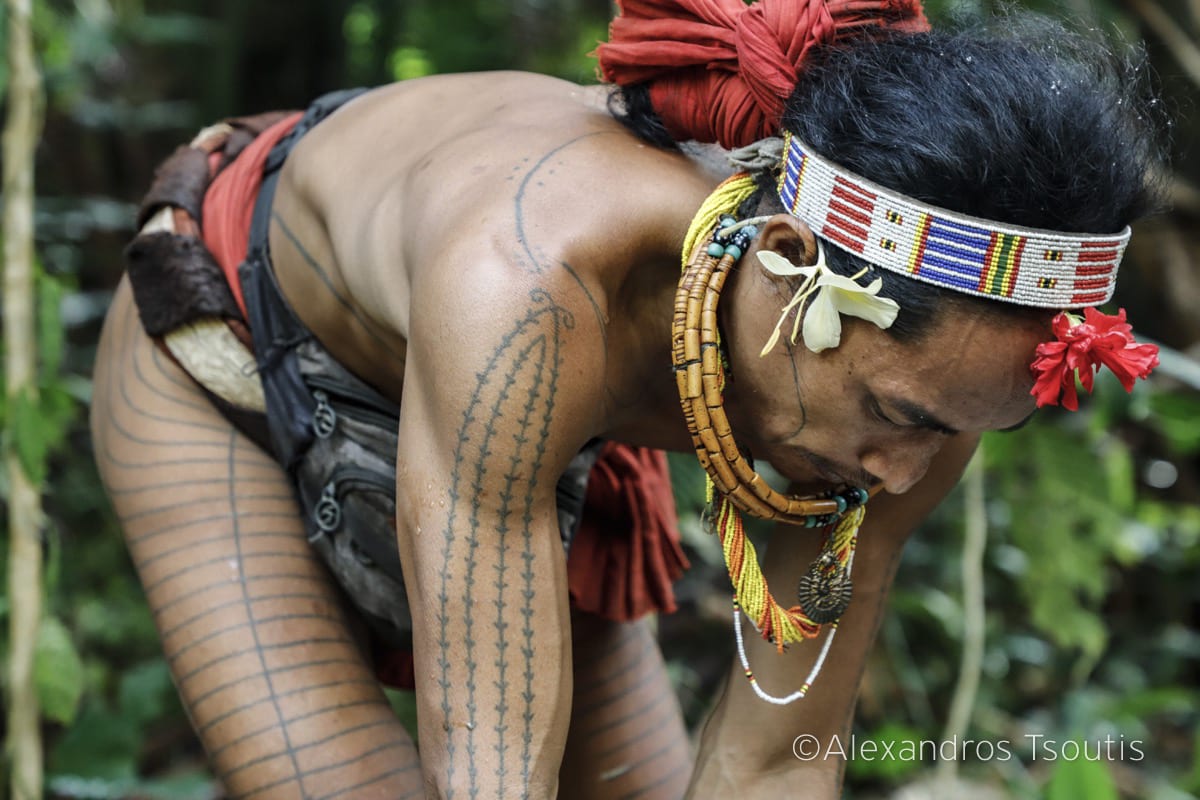 With a slow wooden boat we sail for 5 hours between the Mentawai Islands, 150km west of Sumatra. Our destination is the island of Siberut and the jungle interior where the hunter/gatherer tribe of Mentawai lives, maintaining a traditional way of living.
Upon arrival in Siberut, we were looking for someone to take us into the jungle and arrange for our stay with the tribe. Despite the rush to take advantage of the day, it took some time searching for a bargain deal. A young man coming from the tribe who has been urbanized, will be our guide. At a local market we got some supplies to offer to our hosts, such as cigarettes, tobacco, rice, sugar, etc. We boarded a motor longboat upstream the river and, to our luck, two elders of the tribe boarded. They had the characteristic tattoos all over their body, sharpened teeth, underwear made from tree bark and beaded ribbon with flower decoration on they head. They smoked incessantly and had the knife and the machete as an indispensable tool. The river cruise took about 2 hours and was extremely enjoyable, like in all the tropical jungle-crossing rivers, where I feel like I’m in my natural environment. In some spots you could see women in the water, it was not a swimming activity but a search for shells in the seabed. Upon arrival, we disembark on a coast with very deep mud and after giving cigarettes to the people around we take the path into the jungle. The rubber boots I carried till here were worth the effort, although in many places they were stuck in mud so deep that was hard to release. My friend preferred to walk barefoot balancing on the trunks that were all along the trail, but at some points there were spiked branches that made the experience painful.

The Mentawai live semi-nominally but in autonomous huts scattered in the forest and not in organized settlements. After two hours of easy walking into the jungle’s “sauna” heat, we arrive at a hut where a young Mentawai couple welcomes us. The man had the half-naked appearance of the tribe with full-body tattoos, but his wife wore regular clothes rather than a banana-leaf skirt,  it seems the women’s traditional outfit tends to disappear. These people were very kind and very welcoming. We offered them the gifts and they never asked us for anything more, except from a flashlight that impressed them, in return for… a meal of caterpillars the next day! We searched for a nearby river to flush out the sweat, the water was shallow and relatively flat. The hut was large, built on stilts above the mud. Underneath and around it, were domestic animals, pigs and chicken, creating an… intense smell. Those animals were not included in our meals, that would consist of the rice we brought, some unknown vegetables and a kind of starch bread from a palm tree called Sago, which is important for various uses, nutritional for themselves and animals, construction and more. Mentawai people are traditionally gatherer- hunters, but probably there were not be many hunting game left around. In the hut, among other things, there were some monkey skulls, which once served as lunch and traditional medicine for our host, who was also a shaman. Next to it were some children’s drawings, made by the family’s three children living in the village with relatives, so they can go to school. As our guide -who also has the Mentawai tattoos- told us, the next generation will not live this life in the jungle, following the trend of modernization, with cell phones and motorbikes. You have not much to do spending your time in the jungle, besides enjoying the tranquility of the landscape, with the exception of the pigs’ roars and defecation sounds, the roosters’ croaks through day and night, and in the evening the singing skills of our host, without his smoking habit affecting them.

We will sleep on the hard floor of the “veranda”, under mosquito nets which are a necessity in this environment full of malaria. For breakfast we will be in search for food and in particular the much expected larvae meal. Nearby in the jungle, there was an open space with cut down Sago palm trees. These larvae are breeding in the tree trunk, 6 months after cutting. Our Mentawai friend made a bag from the bark of the tree and started digging the soft inside of the trunk. He caught many white, large and thick larvae that were quite in mobility and were biting, using their two teeth protruding from their heads. We cut out heads and tried them raw. It was not bad, but neither exciting taste. Returning to the hut, we prepared the most of them for barbeque, putting them on skewers, make cut on them and grilling over fire. Their taste was surprisingly excellent. It tasted like meat with a lot of fat, something like a kebab. We ate them with much appetite, with plenty of salt and rice as a side dish, quenching our thirst with sweet tea. Finally it was a quite heavy meal for breakfast and we found it difficult to digest.

During the day we decided to visit nearby huts to meet other tribe members. The “neighbors” seemed they had been left to the jungle, and the household seemed to be packed for long absence. Walking for an hour, we reached another hut where a tourist was staying in. Despite the cigarettes we offered to the host, he refused to be taken pictures without money. The same thing happened when we reached the huts of the old men with whom we were traveling in the boat. Their money claims were excessive. Unfortunately, tourism has changed people’s behavior here like many parts of the world and their character was affected much. Fortunately the family that hosted us were very different and we were lucky to have had this unique experience with them.
Let’s wish the longevity of the Mentawai people, another rare tribe under threat…