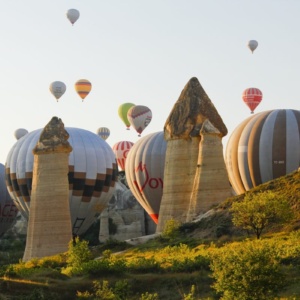 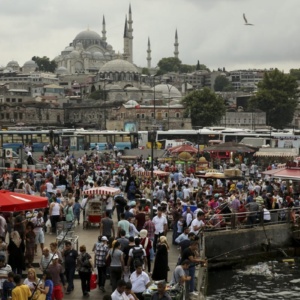 Turkey is a transcontinental country, as it is often referred to, the bridge between Europe and Asia. This applies not only geographically, but also culturally, and for this reason Turkey is a destination that is both exotic and familiar at the same time. Turkey stretches from the junction of the Asiatic and European continents bounded by the Straits of Bosphorus, the Sea of Marmara and the Dardanelles, till Syria, Iraq, Iran, Armenia in the east.

There is evidence that the Black Sea floor was once an inhabited plain, before it was flooded in prehistoric times by rising sea levels. Mount Ararat at the eastern end of the country is its highest peak (5,165 m) and the mythical resting place of Noah’s Ark.

The area where Turkey now stands was part of some of the greatest empires in history, including the Romans, Byzantines and Ottomans that culturally shaped its shape. The city of Troy, destroyed by the Greeks in Homer’s Iliad, was associated with the strategic importance of the Dardanelles Strait.

The famous city of Constantinople (today’s Istanbul) was founded in the 7th century BC. by Greek settlers. The area was part of the Roman Empire that afterwards split in two. In 330 AD the city, then called New Rome, was declared the capital of the “Eastern Roman Empire” by Emperor Constantine the Great, who named it Constantinople after himself. The city grew in size and influence and eventually became a center on the Silk Road, one of the most important cities in history.

The Byzantine Empire flourished for more than a thousand years, throughout the Middle Ages, and its legacy is still visible in today’s Balkans, Greece and Turkey. The Empire was plagued by corruption, infighting and decay, religious intrigues, conflicts and schisms, but as a Christian empire it was Christendom’s bastion against Islamic expansion from the east. Byzantine diplomacy made alliances with Christian, Muslim and pagan rulers, Christianizing the Russian Empire.

One of the biggest disasters of the empire before its final fall was not from heathens, but from Christian crusaders who defeated it in 1204. The empire recovered and recaptured its capital in 1261, until May 29th of 1453, when the Constantinople fell into the possession of the Ottoman Turks after a siege of 53 days and was subsequently looted.

The Ottoman Empire eventually conquered and dominated the entire eastern Mediterranean, until its defeat by the Allies in World War I.

The Turkish Republic was established in 1923 from the remnants of the Ottoman Empire, secular laws were introduced to replace religious conservatism and many reforms to modernize the state. The change from the Arabic script to the 29-letter Turkish alphabet (based on Roman), was one of the many initiatives of the founder of the Turkish Republic, Mustafa Kemal Atatürk. Atatürk continues to be considered the father of the nation and the depiction of his face dominates many places in Turkey. In 2022, the government of Turkey began using the Turkish spelling of the country’s name, Türkiye, as the country’s name in English.

Turkey is a historically rich country, with amazingly beautiful landscapes and the great city of Istanbul, built in perhaps one of the most beautiful places in the world. It is a special combination of west and east and depending on the region it shows cultural similarities with its neighbors. What is common throughout the country is the religion of Islam. However, its interpretation varies greatly, in the north-west and west coasts it is applied quite liberally, while in central and eastern Turkey it is quite more conservative. There are still religious minorities such as Alevis, Greek Orthodox, Armenians, Jews, mainly in the cities of Istanbul and Smyrna. Despite the large Muslim majority of its population, Turkey remains officially a secular country.

If you get know to know the Turkish people, especially in the provincial areas, you will gain experiences of hospitality and friendliness.

From the ancient city of Ephesus to the Byzantine basilica of Hagia Sophia, Turkey has a wealth of world-famous monuments.

The diverse landscapes of Turkey, from the Aegean olive groves to the eastern steppe, offer amazing experiences for the visitor. The most beautiful parts of the country include the Mediterranean coastline, the rock formations of Cappadocia, the alpine pastures of Anatolia.

Turkey offers activities to suit every temperament, from hot air ballooning in Cappadocia and hiking through canyons and snowy mountains, world-memorable cuisine from meze in a Mediterranean port, to spicy Anatolian kebabs and numerous syrupy confections.