Botswana is a landlocked country in the southern part of the African continent. It was a former British protectorate that got independent in 1966 and since then has enjoyed an uninterrupted democracy, rare for the region. Most of the country is flat, uninhabited land, dominated by the Kalahari Desert. It is one of the most sparsely populated countries in the world, with a population of just over 2 million living in an area of ​​580 thousand square kilometers. Botswana is considered one of the wealthiest countries in Africa, with high per capita income and an iconic example of good governance and management of natural resources, which besides organized farming, has rich mineral resources. Even richer is the biodiversity of this semi-arid land, maintaining an ecosystem of unparalleled beauty and  large numbers of wild animals. Almost the whole country could be considered as a national park, you can meet big mammals even on the main roads. Botswana is a costly destination for the visitor, with few, upper class tourist infrastructure. The country has unfortunately one of the highest rates (20% officially) of HIV / AIDS transmission.

The citizens of Botswana, being few in population are not easy to associate with. The ones we met were friendly, kind and slightly shy.

Botswana’s highlights are not in the 4 main cities, the capital Gaborone, Francistown and the smaller Kasane and Maun. The magic of this place is contained in the natural environment, untouched by the human factor and hosting a huge variety of wildlife. The famous Chobe, Savuti and Moremi National Parks will reward visitors with an experience hardly found anywhere else in Africa.
Also, the inhospitable Kalahari Desert as well as the lesser-known Makgadikgadi Pans salines that cover a vast area of ​​the country, are sites of rare morphology on the planet.
But the most marvelous natural creation in this land is the Okavango Delta, the largest inland river delta on earth. In its vast expanse, it hosts a rich ecosystem of flora and fauna, until the water body drains into the depths of the thirsty Kalahari desert.

On a pontoon ferry crossing the Zambezi River, on the quadripoint nations’ border, 5 travelers along with an old Toyota RAV 4, are getting from Zambia to Botswana for the 3rd part of our road trip.

The border post had little traffic. Luckily the visa was free and bureaucracy was minimal, but we had to buy insurance coverage for the vehicle. Steven, a young German motorcyclist who was driving around African, had the same dislike for this fee. We arranged to meet Steven in Kasane, in the evening. After passing our car wheels and shoes through special pits with disinfectant for “foot and mouth disease” that mainly affects cattle, we officially entered the country. In the first steps of the road, countless monkeys were mixing with parked trucks.

Even within the town of Kasane, which is close to the border, we saw warthogs grazing undisturbed by the roadsides. Finding accommodation was a very difficult task in this small settlement, where there were mainly expensive luxury lodges for upper class tourists. We, on the other hand, after much searching door-to-door around the two small town blocks, we’d have to get hosted, all 5 of us in a cheap house room! We got supplied with cans of beer, after eating some junk food outside and dealing with a South African guy about our visit to the Chobe, as the deep sand in the National Park was impassable by our vehicle. Later in the evening, Steven would visit us at the property, having some beer and talking about our travels. Our admiration for his difficult journey was mostly captured by his girlfriend Katarina from Slovenia, who introduced to us. She was traveling around of Africa too, but in a bicycle! Our adventure instantly looked like a “playground” compared to theirs. We talked a lot with the guys, about the difficulties they encountered and about Stergios www.worldvespa.net, the Greek guy who is touring around the world on a vespa. We would see Steven again at the end of his trip when he visited us in Athens. Sleeping in the small room was not comfortable at all. In addition, our travel buddy K. began to suffer from the same unknown disease that plagued me in Zambia. But in his case would it was more persistent and painful. By dawn we headed to the point where we’d board a special safari vehicle for a tour in Chobe National Park. The road was really difficult, our little 4X4 couldn’t cross that deep waterholes and deep sand. Chobe proved worth its reputation. The riverside landscape was impeccable and animals were everywhere, you didn’t have to search for them. Couples of giraffes were taking a difficult position by opening their legs and bending their necks by the river shores to quench their thirst, elephant herds in a row holding the front one’s tail with their proboscis, following the dominant male guide to a safe path. Numerous crocodiles on the shores, relieving their cold blood under the sun rays. Unfortunately we didn’t see lions, but something even rarer. Leopards! And a jackal too. Of course, big cats spots are usually trafficked by tourist vehicles. K had a great deterioration of his health and was almost unconscious throughout the safari. He suffered from fever all night.

After Kasane, our destination was further south, to Maun. Unfortunately, even though we had a 4×4 vehicle, as was proved in Chobe, we couldn’t cross the off-road distance with this car. After all, this is a very dangerous route even for locals with good vehicles, proper equipment, food, water, satellite phones and of course roof tents. We had to take the paved road to Maun and re-enter the National Parks from there. The route was monotonous, deserted, with almost no human presence. Driving for 600 miles, we encountered few vehicles and only an intermediate settlement where we could refuel.

Maun is also a small settlement like Kasane, but here the accommodation options were quite affordable and aesthetically pleasing. We’d spend several days here, with many activities. Beginning with the exploration of Moremi National Park. We’d be chasing wild giraffes on foot but the highlight will be a group of 7 lions that we finally had the chance to meet, from inside the car of course. We’d spend hours with them at a distance of just 3 meters, taking lots of photos from the open windows and the sunroof, which caused unnecessary stress again to our travel buddy T. The lions were mostly lazy during the hot day, but they were surveying the valley at times. At one point, a herd of antelopes nervously approached the area, literally into the lion’s mouth. To our surprise, although the lions got alert, they did not pursue them and the antelopes disappeared rapidly. At some time one of the females of out group needed to pee. But none of us wished to leave the rare sight… So we opened the back door on the opposite side from the lions. This was a quite stressful pee, mostly because other visitors arrived noisily, disturbing the girl and the lions. We came out of the park at sunset, but on the dark road we almost crashed into a giraffe and a cow!

The following day we’re searching for a flight over the Okavango Delta. Since we didn’t waste money on flying over the Victoria Falls, we thought it was worth enjoying this wonder of nature, in all its grandeur. Surprisingly the price was very reasonable and the number of 5 passengers ideal for cost sharing. From the first minutes after taking off with the little cessna, this gigantic wetland reveals its magic. An iconic cluster of rivers, swamps and dry islands, in a beautiful color palette decorated with elephants, hipps and giraffes, as well as many other mammals, reptiles and birds that were not visible from this height. Seeing my photographic passion, the pilot offered me several slanting approaches for better shooting.

But we’ll be enjoying the delta on a next day, crossing it with traditional “mokoro” canoe and even overnight in its wilderness. So we board the mokoro and wander into the waterways that are scattered with hippos. But the boatman was quite cautious approaching then, despite our urges. I will swim in the dark waters of the river, self train my ability to navigate the canoe, and search the land with my friends for zebras, elephants and other wildlife. In the evening we will light a fire and set up our tents for another magical night in wilderness of Africa.

Leaving Maun, we head east to explore the Makgadikgadi Pans. The range of fuel autonomy of our car is again a bug concern. The nearest gas station is at the intersection of Nata, where we will happily find overnight stay and eat some fast food. We’ll return for some 100kms of paved road and then 160kms of unknown, dirt road in a desert landscape up to the salt lakes… that have the size of Switzerland! The stress is big. If our car breaks down at that point, our survival will be in risk. For the most part we follow a dirt road with high dry grass by both sides. The only living thing we come across is a wild horse trapped in front of us. In this surreal incident, under the hot sun, the horse was running scared in front of us for over 40′ without being able to get off the road. Our speed was very limited as the horse’s fatigue increased. We tried many times to stop at a short distance from it and chase it down on foot, but to no avail. After some time we found ourselves on a plateau of the road where we managed to take separate ways. After passing some smaller salt lakes, a bit later we came across a desolate lodge in the middle of nowhere. There was a lonely caretaker and to our great relief, he informed us that he had a few cold beers. Shortly thereafter, we finally reach the vast expanse of Makgadikgadi Pans, a dazzling white surface of salt that under the heat created illusions in the atmosphere. Our final destination, Kudu Island was in front of us. A desert, rocky island with dry trees in a sea of ​​salt… You can call it an alternative vacation spot. Smaller islands pop up in the ‘white sea”, and we’ll enjoy driving in the “extraterrestrial” environment, taking care tot to get stuck in the wet parts.

The exit to civilisation, after a long way, will be by the south where we’ll successfully find the small settlement of Orapa for refueling. this area borders to the vast Kalahari Desert and also abandoned gems’ and precious metals’ mines are found here. The last stop of our trip in Botswana will be the 2nd largest city of Francistown (100 thousand inhabitants). Here we will rest a bit enjoying the benefits of civilised Africa and get to know with the local population, till our way back to Zimbabwe. The 3rd part of our daring trip in the south of the African continent filled us with beautiful images and powerful experiences. 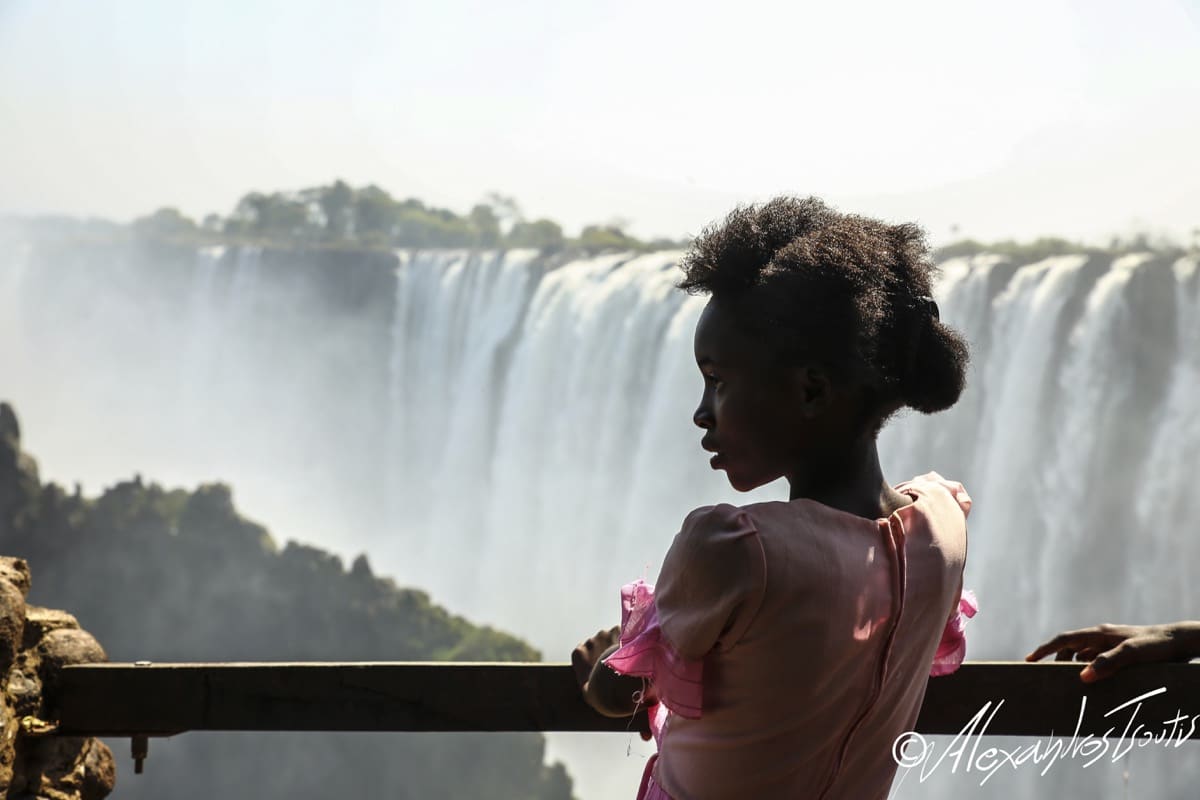