Georgia, or Sakartvelo as it is called in the local dialect, is a country between the Asian and European continents (geographically classified in Asian countries) and a former member of the Soviet Union. It extends from the Black Sea to the Caucasus Mountains, encompassing a diverse landscape, from coastal resorts, extensive valleys of famous wine-producing vineyards, to the highest peaks of Eurasia. The history of this place dates back to the depths of the Paleolithic period. The earliest trace of wine producing was discovered here, “aged” for 8,000 years. The area is identified as the Colchis of the Argonauts of Greek mythology, with the famous “golden fleece” being an indication of its mineral wealth and technical knowledge of collection from the rivers.

At the end of the 4th century B.C., the kingdom of Iberia was founded and the characteristic alphabet was adopted. In the 4th century A.D., Christianity was established and links with the Byzantine empire are strengthened, promoting arts and culture. In the ensuing centuries of feudalism, it received invasions from the Seljuks, Mongols, Persians and eventually the Ottomans who conquered the land, annexing it to their empire.

In modern history and after the events of World War I, the Soviet Union was established with the Georgian Republic as one of the original members, until the collapse of 1991. Then, a bloody war broke out, resulting in the secession and unrecognized autonomy of Abkhazia. and South Ossetia, which resulted in a widespread refugee crisis. Conflicts continued until the crisis of 2008, with Russia actively involved, invading disputed and other Georgian territories. The country’s geopolitical position is significant, with hydrocarbon pipelines crossing its territory.

In a population of 3.7 million, the visitor will feel intimate, welcoming and will encounter kindness, friendliness and helpfulness. English is widely spoken in the capital city, but not in the countryside.

The capital Tbilisi is a great combination example between traditional and modern elements. A vibrant, cosmopolitan city with many sightseeing including lots of orthodox temples that follow the typical architecture of the area.

The next most populated cities are Batumi by the Black Sea and Kutaisi, capital of ancient Colchis. Other important ones are Mtskheta, which is the center of the Orthodox Church, and Gori, Stalin’s birthplace.

Other points of interest are Mount Kazbeg, the rocky town of Uplistsikhe, the Gudauri ski resort and for wine lovers, the great wine-producing region of Kakheti.

In the land of mythical Colchis…

When you come to Tbilisi you will experience moments that you won’t forget, even if you drink a lot of excellent local wine, which does not age in barrels, but in clay pots buried in ground. After all, this place has been the cradle of winemaking since the Neolithic era, over 8000 years ago. You will eat khinkali, hand made such shaped ravioli with a variety of stuffing, you will eat khachapuri, a salty cheese pie or the egg added viariety of Adjarian khachapuri, as well as many other delicacies with influences from Greece, the Mediterranean and also Turkey and Persia… 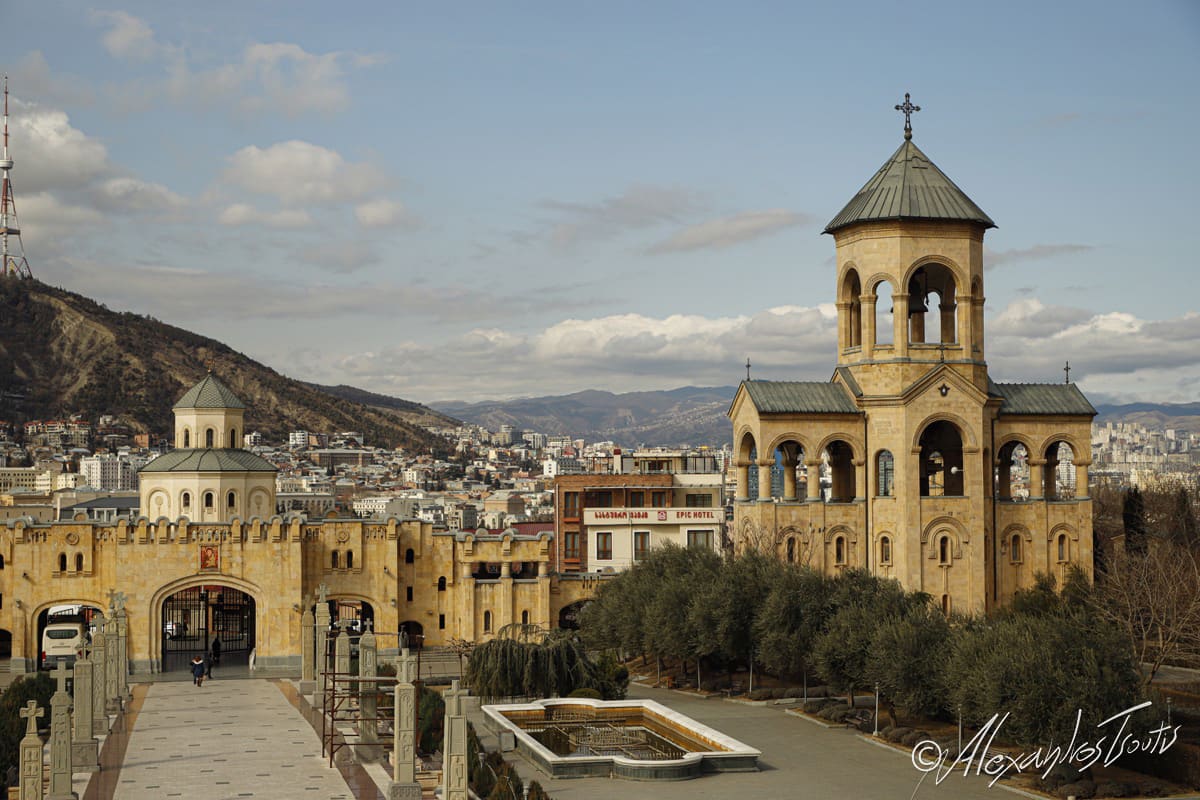 In Tbilisi you will find exquisite architecture and countless attractions. In the old town you will admire traditional buildings with wooden balconies, imposing ancient churches, a mosque and a synagogue. You will get on foot or by the cable car crossing over the roofs and church domes, to Narikala fortress with panoramic views over the city. At the top of the same hill is the statue of “mother of Georgia” (Kartlis Deda), a symbol of the country, a female figure holding a wine-pot in one hand greeting friends and a sword in the other for the enemies. Inside the city, you will be amazed to discover a gorge, the Tsavkisi-Tskali, with bridges full of love padlocks and even a small waterfall. You’ll stroll along the Kura River (Mtkvari), you’ll shop at the traditional Meidan Bazaar, and on a Saturday you’ll wander the arts and antiques at the flea market.

In the evening you will enjoy a steam bath in the public sulphurous thermal baths. Right next to it is another bath building, the Orbeliani Baths, with a stunning facade of blue tiles, similar to a Persian mausoleum.

But Tbilisi also has its modern side that blends in with the traditional. You will cross the “Friendship Bridge”, a new futuristic glass and metal structure that adds to the rest of bridges connecting the two sides of the city. The next, even more futuristic construction that will impress you is the tubular glass building of the Rike Park, a theater and exhibition centre, with the classic style  presidential mansion right behind. At the same, east side of the city you will find the Sameba Cathedral, the largest temple in the country, visible from all the surroundings. Back on the west side, you will definitely make a stop on the Bamba row and Chardin street sidewalks, with a plethora of restaurants, cafes and nightclubs. You will continue to come across a very special, sloping clock tower that seems to have escaped from a fairy tale. Do not miss the Jvaris Mama Churche, the Sioni Cathedral, Norashen Armenian Church and furthermore the Church of St. George (Kashueti). The abundant of sights will make you forget about tired feet and you continue to Freedom Square with the golden statue of St. George killing the dragon. You will find many points of cultural and commercial interest on Rustaveli Avenue and adjacent streets. The Vake suburb is one of the city’s most upgraded, with cafes, restaurants and parks. You will find reasonable prices anywhere, with the exception of wine that is not much cheaper than the European ones.

In Tbilisi and in many parts of the country, the buildings of the Soviet era will not be unnoticed, but despite their ugliness they add to the multicultural character of the country.

Although you will not see many tourists, Tbilisi provides a surplus of tourist infrastructure and services. Tour operators with “mobile offices” in parked cars covered in posters from popular destination, are everywhere in the city and offer competitive excursions. You get even more independence if you rent a car, by a half Greek agent in my case. After all, Greeks ties to this country have a long history.

One fine morning, you will head north, choosing the spectacular mountain route to Caucasus. But first you have to make a stop at Mtskheta, which used to be the old capital. The fortified city with the magnificent Svetitskhoveli Cathedral, the Jvari Monastery across the hill and other historical monuments are designated a UNESCO World Heritage Site.

On your way to Kazbegi you will drive on the “Georgian military road” (Gerogian military road) that continues to the Russian border and many rulers in history have crossed it. As you ascend Caucasus, the imposing landscape will amaze you. You will cross mountain valleys by the flow of Aragvi River and you’ll find small villages scattered. As altitude rises, snow will dominate the landscape creating unique images.

The sunshine and good condition of the road that climbs along the steep granite side wall of the mountain will make you forget that it is February and you are in the mighty mountain range of the Caucasus. You will be finally reach the ski centre and mountain resort of Gudauri, but the road may not be open further. A police car will command vehicles to return and the snow blocking the road will look like exceed 1.5 meters. Your question about many trucks that were idle on the roadside for many kilometers, will be clarified now. No, they did not participate in a strike as you thought. It doesn’t matter that you won’t get to Kazbegi, or Stepantsminda as the village is now called. Too bad you won’t be hiking in the legendary Caucasus and you’ll not see the Gergeti Monastery, maybe the most pictured spot of the country. Now you have one more reason to come back on another season. If you insist on going back in winter, you’ll be lucky if you don’t get trapped in Kazbegi indefinitely. It is rumored, however, that a large tunnel will be constructed bypassing the road that is prone to snow.

Too bad you didn’t bring your snowboard equipment to do any downhill. The ski centre looks nice and organized, with the exception that you can’t find a parking area. You may decide to go back to one of the previous villages instead of spending money in Gudauri accommodation rates. You won’t find many villages with infrastructure, but in Pasanauri you will find two or three simple guesthouses with a restaurant. You will love it, the dishes are delicious and the vibe truly authentic. And if in the evening you’re still hungry and everything is closed, you might be lucky enough to find a nice, empty but tidy restaurant with the owner and chef waiting for you. You will communicate with body language and they will serve you khinkali and everything you want.

Returning to Tbilisi, you will visit same places and new ones. You’ll still have plenty of good wine of the famed Saperavi variety, and you’ll eat more khinkali with mushroom filling. You won’t want to leave… Georgia is not one of the most jaw dropping destinations on the that you may have been on earth, but it has an irresistible attraction that will surely make you want to come back.