Zambia is a country in Southernn Africa, with a rich ecosystem and all the authentic characteristics of the whole continent.
Although it is a landlocked country, three large rivers flow through, Kafue, Luanga and the Zambezi. The latter, at one point falls from a height of 100 meters to create the imposing Victoria falls. Zambia was a British colony, named Northern Rhodesia, part of the Greater “British South Africa Company” ​​led by Cecil Rhodes. It became an independent state using its current name in 1964. Nowadays it remains a poor country with low GDP per capita, with 60.5% of Zambians living below the  poverty line.

The population of Zambia is multi-ethnic, consisting of about 73 tribes and corresponding dialects. The residents we met were very friendly, cheerful and English speaking.

The south of the country is relatively barren. In addition to many traditional villages and National Parks like the “Lower Zambezi” and “Kafu”,  the cities of Mazabuka and the capital Lusaka are build there. But the country’s most popular destination, shared with the neighboring Zimbabwe, is the Victoria falls. At that point, the Zambezi river, the 4th longest river in Africa (2,500 km), creates a magnificent display of nature’s power to continue its journey to the Indian Ocean. Here is also the small, modern city of Livingstone, named in honor of the Scottish missionary, physician and explorer, who offered the discovery of the waterfalls to the general public, giving them the name of Queen Victoria. Three-quarters of the waterfalls flow from the Zambian side, while a historic metal bridge, perhaps at the most scenic spot on the planet, connects with the Zimbabwe side. Just a short distance, alongside the river, there is another border crossing, in Kazangula, the only place in the world to find a quadripoint border, of Zambia, Zimbabwe, Botswana and Namibia.

One step from heaven’s edge…

The 5-passengers’ road trip, squeezed into the small, old Toyota RAV4, continues after Zimbabwe, in the 2nd country of the journey. After much time spent in bureaucracy of the Chirundu border post, we crossed a metal bridge over the Zambezi River and finally stepped on Zambian territory where we were excited by the first views. 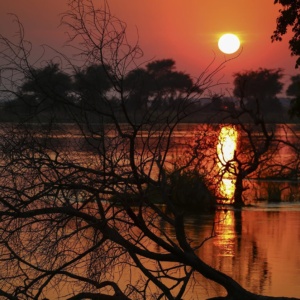 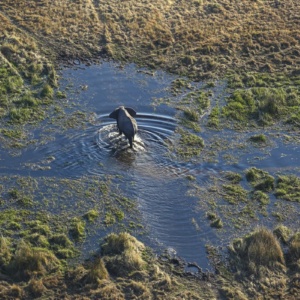 Here everything seems simple, poor and primitive but full of “warmth” and intimacy. On the roadsides, women dressed in colorful fabrics were selling their goods, fruits, vegetables and more. The interaction with the people was pleasant and we were asked to send them the photos we took them. The road was good, without the big trucks traffic we had in Zimbabwe, and most of all, without the police speed controls. After the first few kilometers, on the side of the road we see a small plane crashed! The incident happened one day before and as some passers-by told us, fortunately there were no victims.

On route, I began to experience sudden flu symptoms, feeling a high fever. On the previous days we were not in a human settlement but in a National Park, so I started to worry about some exotic disease. The lack of space in the car, the sun and the heat made my situation worse. The comfortable road made it possible to reach Mazabuka by dusk and find a very nice accommodation with a garden. After a difficult night with fever and incredible sweating, I was fully recovered in the morning. We enjoyed breakfast in the garden and then wandered around the city of Mazabuka and its train station. Some little kids were begging and we bought them pizza that they gladly accepted, though they had probably been taught to ask for money.

We continued west, stopping at the settlements we met until we reached Livingstone. We’d spend the next 3-4 days here, so we were looking for affordable accommodation in this tourist town. In very nice city restaurants, under romantic candlelights, I tried caterpillar menu for once more and crocodile for the first time, with nice lobster-like taste. Of course, in Livingstone nothing can be more amazing than the Victoria Falls. On the next day we arrive anticipated at the National Park receiving raincoats at the entrance, necessary as dense vapor clouds fill the air. What a natural feast! The gigantic force of water roars as the Zambezi River precipitates, extending far in width and depth. In the local dialect, the waterfalls are called “mosi-oa-tunya” which means “smoke that thunders”. Double and triple rainbows form at many points along the route, complementing the spectacular scenery. In addition to visitors -mostly locals and fortunately not many- monkeys and baboons live in the national park. Since 3/4 of the waterfalls are on the Zambian side and there are plenty of sightseeing spots, decided to avoid spending two more visas, wasting pages in the passport and paying an extra park entry fee on the Zimbabwean side. Another spectacular spot outside the park’s boundaries is the metal bridge that stretches over the Zambezi Canyon and connects Zambia with Zimbabwe with the waterfalls in the background. We walked till the middle of the bridge where soldiers control the border line. At this point one can jump off the bridge tied with bungee jumping equipment. However, in addition to the very high cost of this activity, as well as others such as rafting in the wild river, helicopter flight, paragliding etc., in 2012 there was an incident where the “rope” was cut, fortunately without a fatal result, but raising the issue of security.

There was a full moon on that night so there was an announcement about the “lunar rainbow” in the park, but with a separate ticket. Since we were eagerly trying to limit the costs of our trip, we decided to try our luck as smugglers. In fact, we stood at the exit and with the cover of darkness waited long until the guards relaxed their attention. It was a bit unlikely to get all 5 of us in at the same time, so we tried in parts. Some of us got noticed and used the excuse that had lost our friends who had kept tickets. I don’t think we were quite credible, but the guard showed kindness to the lost tourists. The spectacle I saw was above all expectations. The rainbow that appeared in the dark under the moonlight, with the dark background of the waterfall, is perhaps the most bizarre, outworld phenomenon I’ve ever seen.

The next day we will challenge our personal safety, once again after Zimbabwe. Initially we decided to approach the other side, where the waterfall drops. Our goal was to get to the Lion’s Pool, a natural pool where one can balance, with head off the edge while got holded by his feet. But at that time the water level was high, the river was flooded and there was no access. We were watching the waterfall edge a little further, while in a safe part of the shore, youngsters were swimming and playing. Me and my travel buddy made the unreasonable decision to walk through the unknown riverbed with a wooden stick support. In the first section there was a low barrier, on which we were balancing. It would be impossible to do this on our own if we did not meet a fisherman in the river who, without speaking a word of English, offered to guide us. So we were holding each other hand-by-hand for the next 2.5 hours, stumbling on shallows, sinking deep into the water rapids, with the edge of the waterfall a few meters away. But my biggest fear was not a fatal fall, but the concern of the rest three travel buddies worrying about us. Without knowing the distance and defying the obvious danger, we finally got to the point, thanks to the experienced fisherman. The scenery was so amazing, that I was wondering if I was in paradise on earth, or did I actually end up in heaven. The thick clouds of water vapor had a dreamy pink hue and I was balancing with trembling feet on the edge of the precipice, watching the enormous volume of water falling beneath me in slow motion. We carefully swam the Lion’s pool, but due to the rush of water it was not possible to pose with the head off the edge.

This priceless life experience was worth the excessive risk and also the anger of our friends who were waiting in great worry. In addition to them, two guards were waiting for us, realising our illegal act. So, except from  rewarding the fisherman, we also took care of them. It took a long time to calm down our angry friends, they had a totally reasonable reaction. So we came up with something bold enough, all together as a team. In the wider area of ​​the national park there were wild animals. The elephants were hanging around freely along the side roads, but we had enough of them, especially after my “close contact” at Zimbabwe’s Mana Pools National Park. What we were looking for, were the 7 rare, southern white rhinos that were protected in the area. To our knowledge, the approach required an expensive safari, but again luck was by our side, as we met a guard, who without much negotiation led us on foot to the adorable beasts. Rhinos’ vision is not strong but we had to hide our smell, so we approached in opposite wind direction. Only one of us wearing a white t-shirt had to take it off. We approached just 5 meters away from the family of giant mammals!

Zambia completed the 2nd part of our journey with invaluable experience, including maybe the most spectacular waterfalls in the world. On the next day we drive to the quadripoint border in Kazungula, to board a floating platform that will take us across the banks of Zambezi, to Botswana for the 3rd part of our journey.