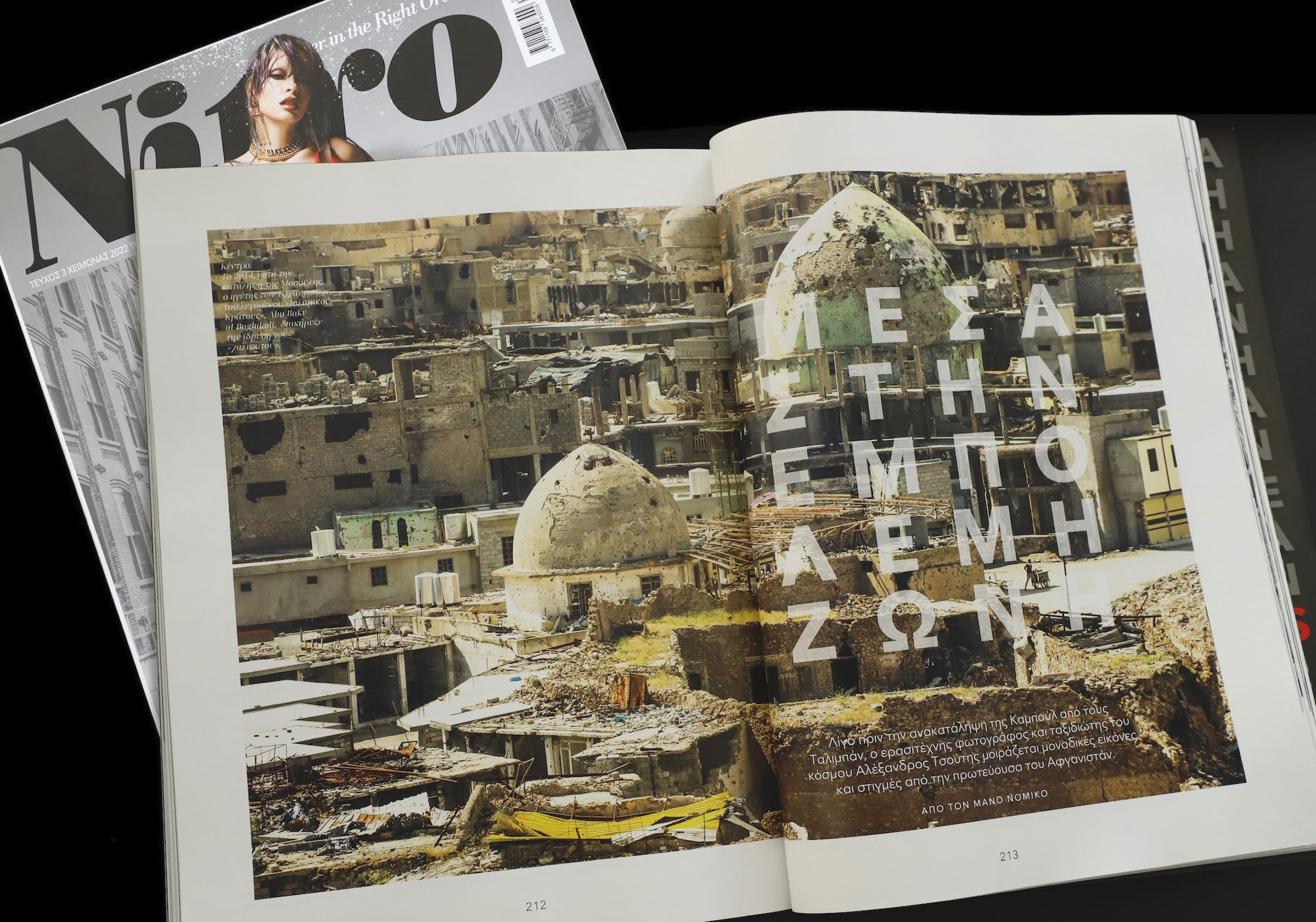 The main deterrent to travel after the financial cost, is the fear of potential danger. But as I usually say, the world is not as scary as we think.
Of course, there are places where war and social instability make them unsafe in some cases. In a 12 page interview in NITRO magazine, I present images and personal experiences from wounded places, such as Afghanistan, Iraq, Syria, Mali and Burkina Faso, South Sudan, Yemen, Chad, Venezuela, Somaliland. We even talk about the recent road trip to peaceful Colombia that still has a bad reputation from the past.
Honored to be in this excellent table book of the new NITRO.

How do you choose your next trip? Do you have any criteria?

My destinations are basically outside Europe. I am attracted to places that have a factor of challenge, of adventure. I’m looking for authentic, indigenous cultures that have been less affected by modernization and westernization and tend to disappear. I have a special love for the raw beauty of the African continent, for the less visited parts of Asia and even further afield, such as the stunning Papua New Guinea and the Solomon Islands.
Of course for the destination is mainly chosen by the air ticket price available at a certain time.

What are the images and feelings you received from your trip to Afghanistan?

Afghanistan, as we all know, has been a war zone for the last 40 years and the situation is worsen after the Taliban took power a few months ago. Religious fanaticism, human rights abuses, sharia extremist Islamic law are a reality. Social conditions are so difficult for the population that is forced to become refuges.

But this secluded, mysterious, harsh place holds a treasure of experiences, an alternative beauty and an unexplored culture. The passionate travelers who dared to visit, encountered a rare anthropological treasure, people tortured but extremely pure and cordial.

In fact, this happened shortly before the recapture by the Taliban.

Indeed, in December 2020, when I was able to visit the country with two travel buddies, after pandemic cancellations, the Taliban controlled most of the territory. The deadly suicide bombings were a daily issue, the ill ideology of the extremists targeted civilian population, places of worship, hospitals, schools with young students! It was a means of pressure in view of the imminent withdrawal of American forces. The land travel we took, either by choice or due to flight cancellations, were particularly unsafe, especially in areas of Taliban checkpoints. If we were spotted, that would make us hostages, or executed.

You have visited other “dangerous” parts of the world, such as Iraq and Venezuela. Or is the definition of “dangerous” wrong?

Our everyday transportation to get to work could also be potentially dangerous. Objectively, however, war zones and countries with social and political unrest and increased crime are dangerous. Yes, I have visited Venezuela twice and fortunately its amazing, unspoiled natural beauty prevailed over the dangers. In fact, the people I met were extremely friendly and cordial, I still keep in touch with some children.

I have visited the bombed Mosul in Iraq in 2018, a few months after the defeat of the “ISIS” jihadists. It was the most shocking thing I have ever seen. A ghost town with unimaginable images of doom and death. At the side of the road were active ammunition, large-caliber missiles, RPGs, suicide bomber belts. All this among baby toys, clothes and all the belongings of the innocent citizens who lost their lives, captives of the extremists who used them as human shields. You could see whole corpses in decay. The unbearable smell of people rotting under the rubble and by the streets made the experience horrifying. It was considered the most mined area on the planet, ISIS members were hiding mixed with the few civilians, but the most daring thing was that we managed to cross all the roadblocks to Mosul without a visa. Illegal entry into the country at that sensitive time could lead to jailing together with jihadists in the worst prisons on the planet.

I have visited other destinations that were in civil conflict and general instability. In Mali and Burkina Faso in 2016, jihadist organizations such as Al Qaeda in the Maghreb were active. In Syria in 2019, which although the war is still going on, I would not say that I felt threatened. In Yemen in 2013, at the beginning of the bloody civil war, with kidnappings of Westerners that had a tragic end. In Somaliland in 2015 which is an unrecognized but relatively peaceful state of Somalia. In remote areas of Cameroon and Lake Chad of the same name country in 2018, where Boko Haram launches attacks. Chad’s president was shot dead this year. In the Tun Sakaran archipelago of Borneo, a stronghold of the Islamist organization Abu Sayyaf which is the eastern branch of ISIS. In May 2021 I traveled to South Sudan, where despite the armistice, rival groups are attacking villages and executing civilians.

To the question that may arise about the reason for these choices, the answer is that I am also interested in this side of the planet, not just the idyllic one. The purpose of my travels is not leisure but discovery. My destination and hero of my images… is humankind.

But do you have any moments to share with us that you really felt the danger or was there any concern or difficulty?

I have stress before every trip, but in more off the beaten path destinations, adrenaline gets high. I admit that before the Afghanistan trip, I could not sleep. I often feel scared but fortunately I have never actually encountered life threat, after all in those destinations a dangerous incident would have probably been fatal. I often mention that the only time I was really in danger was from a wild African elephant in a Zimbabwean national park where we were free walking looking for wildlife. I mention it again to show that by common sense the world is not as dangerous as we think.

Recently, you traveled to Colombia, another country with a not so good reputation. What did you expect to see there before visiting it and what did you see up close?

Colombia is now a modern, organized country trying to get rid of the notoriety of its recent past that still haunts it.

The drug trade of Pablo Escobar’s infamous “cocaine empire”, the armed action of guerrillas and paramilitaries, crimes and kidnappings, made it one of the most violent and dangerous countries on the planet. But these are now a thing of the past. Of course, as in all Latin America, one needs to take some precautions, especially at night or in isolated parts of cities.

In fact, you self drove in Colombia. Difficult task?

Most visitors, as well as locals, avoid driving long distances in this country which is huge, with poor road network and increased traffic of heavy vehicles. Despite my previous experience, I was worried about possible dangerous areas, ambushes, vehicle breakdown in an isolated place, given that I do not speak Spanish.
Fortunately everything went well. Despite the tedious driving hours I shared with my travel buddy, the road trip offers independence and an acquaintance with a country beyond beaten path.

What do you bring back to Greece, after each trip?

How was your contact with the Afghans? What did you see through their words and eyes? Was there contact and communication with Afghan women or were there any restrictions? How would you describe Kabul?

The first experience with Afghanistan, upon arrival in the capital Kabul, is the heavily guarded airport, with over 5 stages of entry control. Of course, this does not prevent suicide bombers as it turns out. Kabul is home to more than 5 million souls and claims the primacy of chaotic, unruly traffic conditions and environmental pollution. Built on a plateau at an altitude of 1700m is one of the highest elevated capitals in the world, with colorful slams hanging on the slopes of the surrounding hills reminiscent of the favelas of Brazil. All this is a magical image in my eyes, especially on the days when the snowfall added even more beauty to the scenery.

A bustling part of the city is the Bird market in central Kabul, an activity much loved by locals. Entering the market is like a journey back in time, perhaps a hundred years ago, to a corner of the city untouched by modernity. The market is extremely crowded, this is also the charm of such places. If there was not in pandemic times and the constant fear of a bomb attack, it would have been more carefree to have such close association with enthusiastic crowd.

All the people we met and socialized with, showed a rare cordiality and kindness, while the presence of foreign travelers was unusual for them.

In Afghanistan we met and hung out with some young girls, liberal and educated, who changed the stereotypical image we have about the position of women in Afghanistan, inspiring hope. Unfortunately, women’s freedoms have taken steps back since the Taliban came to power. Despite the short time we met, we maintain a good friendship with those girls.

I also visited other cities, such as Bamiyan, known for the famous giant, carved Buddha statues that were blown up by the Taliban in 2001. Now on the rocks hanging above the small town, from the majestic historical monuments only empty gaps survive. I also visited the cities of Herat and Mazar-i-Sharif, with their majestic mosques, and  the wider Balkh area as well, which was falling to the Taliban day by day.